Review of *The Political Thought of America’s Founding Feminists* 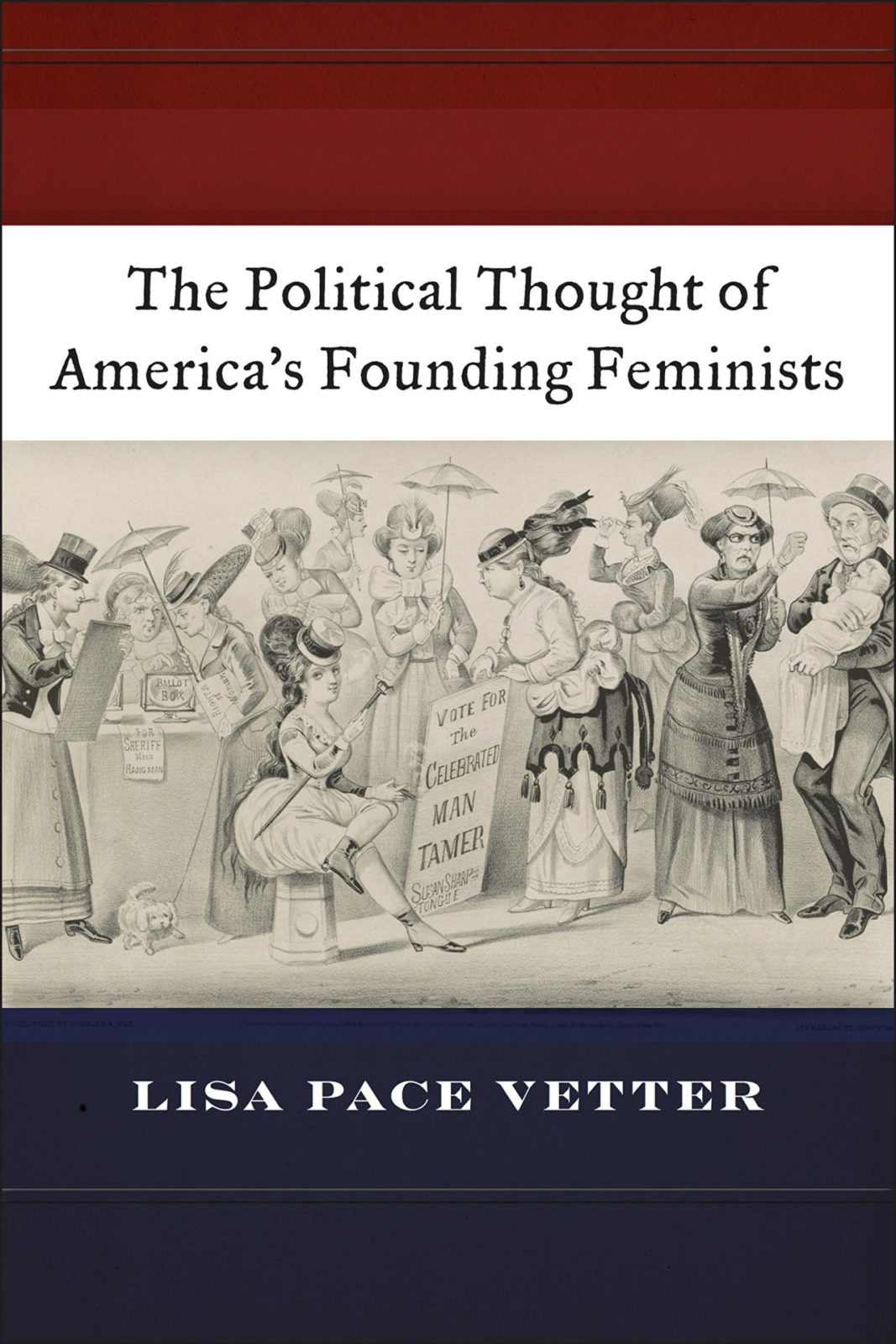 Male voices dominate the canon of American political thought.  Lisa Pace Vetter’s book, The Political Thought of America’s Founding Feminists, examines the political theories of seven women who were central figures in American political thought, despite their exclusion from the contemporary canon.  Makers of the canon have dismissed these thinkers as derivative “popularizers” of men’s ideas and their theories as “mere advocacy or activism” (216).  Instead, Vetter shows how these women built on classical political thinkers like Alexis de Tocqueville and Adam Smith to make original contributions to American political theory.  Their analyses of slavery, abolitionist politics, and women’s oppression in the early Republic contributed to our understanding of fundamental American political principles such as citizenship, equality, liberty, happiness, and justice.  For Vetter, this merits these women’s inclusion in the canon as “America’s founding feminists.”

Beginning her analysis with British travel writers Frances Wright and Harriet Martineau, Vetter examines how both women’s abolitionist and feminist analyses of American politics encouraged women to think and speak freely.  Wright develops Alexis de Tocqueville’s concept of “interest convergence” to demonstrate white men’s interest in Black and female equality.  However, she departs from Tocqueville when she advocates for a universal education that will enable all citizens to distinguish opinion from truth as they interrogate the voices of elite thinkers.  Martineau, on the other hand, builds on Adam Smith’s work to develop a unique theory of sympathy that requires citizens to engage the “other” to develop a pluralist, culturally specific understanding of morality and human happiness.  For Martineau, sympathy facilitates the understanding that difference need not produce inequality.

Vetter’s analysis next examines two thinkers known primarily as abolitionists and only secondarily as feminists, Angelina and Sarah Grimké.  First, Vetter defends Angelina’s rhetorical style against accusations that it was too incendiary.  Vetter demonstrates that Angelina’s impassioned rhetoric is consistent with Adam Smith’s moral theory of rhetoric, “provid[ing] an example of how to deploy a powerful, often deeply emotional rhetoric while maintaining moral and intellectual legitimacy.”  Next, Vetter demonstrates Sarah Grimké’s unique combination of Quaker constitutionalism and human reason, which suggests that the U.S. Constitution (or any constitution) is only valid to the extent that it meets the requirements of what Quakers understood to be a God-given “fundamental constitution,” which includes all people under its rule.

The next two chapters examine woman suffragists who were also, secondarily, abolitionists.  Vetter looks first at Lucretia Mott’s contribution to political thought, which has long been overshadowed by her contemporary woman suffragist Elizabeth Cady Stanton, who Vetter examines second.  Mott’s anti-dogmatism requires that each citizen become a truly free thinker because oppression occurs when people accept any particular creed besides their own.  Left to their devices, Mott asserts, individuals can recognize and reject dogmatism in all its forms, producing a radical, self-scrutinizing democracy.

The central question framing the discussion of Susan B. Anthony in Vetter’s next chapter has long vexed scholars of this radical suffragist:  How should we understand Stanton’s overt racist and classist language?  Vetter frames it within Stanton’s use of ridicule as a rhetorical and political tactic, suggesting that her words are intended to mock those who spoke them first, “voicing the opinions held by the elite men she targets…, addressing them in a language they would understand” (183).  Again using Adam Smith’s moral theory of rhetoric to gauge tactics, Vetter argues that while Stanton succeeds at ridicule, she fails “the most important requirement of Smith’s moral theory of rhetoric, namely the ‘propriety’ test.  At such a tumultuous time in American history, Stanton’s language was not ‘correct and proper.’” (195).

In the least developed of the chapters, Vetter makes abolitionist feminist Sojourner Truth her last addition to the canon, [abolitionist feminist Sojourner Truth].  Here, too, she demonstrates how Truth’s use of ridicule, more successful than Stanton’s, mocks men who fear women’s education, whites who fear Black liberation, and Black men who fail to advocate for Black women’s enfranchisement.

Vetter’s conclusion exposes in full view a disappointing theoretical hitch that shadows her analyses of America’s founding feminists.  Vetter argues that the use of the feminist concept of intersectionality is what most ties these disparate thinkers together.  However, her individual chapters barely use the concept, which is especially troubling given that all of these women wrote and thought about Black and women’s liberation.  At times, this leads curious uses of the term, as when claims that “the intersectionality that exists between Northerners and Southerners on the issue of slavery is undeniable” (113).  Here, the concept and its application are either misguided or incomplete—it is left opaque what this intersectionality is.  This might go unnoticed, especially among Vetter’s intended audience, because Vetter doesn’t define intersectionality for another 50 pages, and then only vaguely, as “a concept by which oppression is understood in terms of gender, race, and ethnicity as well as class” (165).  When used most successfully, as Vetter finally does in her last chapter on Sojourner Truth, intersectionality is transformative, describing how categories of social identity, in R. W. Connell’s terms, “abrade, inflame, amplify, twist, negate, dampen, and complicate each other.”[i]  But Vetter’s earlier definition leaves capacious room for misunderstanding or missing entirely that intersectionality is about the relationships between categories of social identity (gender, race, ethnicity, class, sexuality, and others), hollowing out the theoretical power of intersectionality.  Despite a conclusion that emphasizes the importance of the concept to her argument, Vetter’s analysis throughout merely tosses the concept in now and defines it loosely, too late, and insufficiently.

Perhaps to justify these women’s inclusion in the canon of political thought, Vetter spends quite a bit of time comparing Wright’s and Martineau’s ideas to their male contemporaries, primarily Tocqueville and Smith, to demonstrate the originality of the women’s thought.  Alternately, Vetter measures the success of the Grimké sisters’ and Stanton’s ideas and rhetoric by criteria developed by Adam Smith without telling her readers why we should measure these women’s thought by Smith’s yardstick.  In either case, male theorists remain the center to which the excellence of Vetter’s women thinkers are compared, or by which they are measured and found deserving of inclusion.  By evaluating these women’s work by criteria laid out by canonical male theorists, Vetter’s work unwittingly maintains the gendered hierarchy it seeks to upset.

Vetter’s most significant contribution may be somewhat disciplinary-specific, as much a tacit commentary on the disciplinary insularity of political science as an original analysis of these women’s thought.  Vetter acknowledges, as she does in her analysis of Lucretia Mott, that while historians and biographers have known the influence of many of these women, it “remains largely unknown to political theorists” (145).  Thus, her work is a critique not only of the traditional canon, but of the discipline of political science itself, implicitly inviting political theorists to read not only more broadly outside the traditional canon, but also more cross-disciplinarily—an invitation we would all do well to accept.

Christine Talbot is Associate Professor of Gender Studies at the University of Northern Colorado, where she coordinates the Gender Studies program.  Her work focuses on gender, feminist, and cultural history in the United States, centering particularly on cultural and political conflict about and within The Church of Jesus Christ of Latter-day Saints.  She is the author of A Foreign Kingdom:  Mormons and Polygamy in American Political Culture, which examines conflicts over the LDS practice of polygamy in nineteenth-century America as national debates about gender, family, citizenship, and the public/private divide.  Her current project is an intellectual biography of excommunicated Mormon feminist Sonia Johnson.

“If she is in Woman’s Apparel…”

The Society for U.S. Intellectual History is a nonpartisan educational organization. The opinions expressed on the blog are strictly those of the individual writers and do not represent those of the Society or of the writers’ employers.

All text (including posts, pages, and comments) posted on this blog on or after August 7, 2012, is licensed under a Creative Commons Attribution-NonCommercial-ShareAlike 3.0 Unported License.

My piece for @ChronicleReview on the 50th anniversary of Robert Nisbet's book The Degradation of the Academic Dogma, a classic analysis of post-WW2 research university and academic capitalism. Great to work w/@GutkinLen on this one! #usih @Ideas_History

I don't say it enough on here, but I'm always open to pitches, especially book review essays. And if you don't have a polished idea but are interested in something, feel free to reach out. I'd also love to work with my academic history friends. #twitterstorians #history #usih

For all my #USIH friends, you are damn right that I gave Pulitzer Prize winner Vernon Parrington a shout out in my article. He was OU's first football coach. I'm not sure any other program can claim a Pulitzer winner as a coach. https://www.washingtonpost.com/outlook/2021/10/09/red-river-showdown-reminds-us-that-oklahoma-texas-are-inseparable/

Mike O’Connor’s remarkably learned and wide-ranging, A Commercial Republic is the kind of book that David Armitage and Jo Guild, authors of the History Manifesto, claim is no longer being Read more

Children’s Culture at Halloween: Be More Than You Can Be

In case you are wondering where kids get their ideas for Halloween costumes, I have a modest proposal.  Consider the large sample in the small town of DeLand, Florida.  With Read more

Throntveit sets out in his Power without Victory to recover “the neglected ties between Wilson’s internationalist vision and … American pragmatism” (p. 7). Such a quest demands a combination of Read more